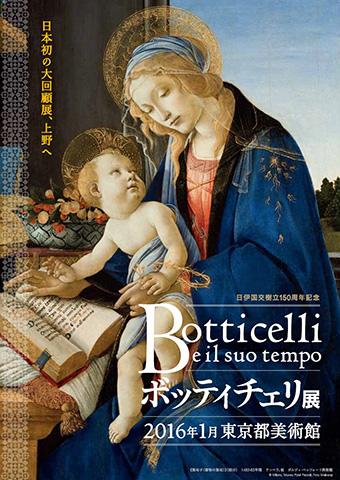 Botticelli and His Time

Sandro Botticelli (1444/45-1510) is known for his paintings of elegantly beautiful Madonnas and goddesses of myth. Because many are painted on wood panels and are in extremely fragile condition, an exhibition of a substantial number of Botticelli paintings has never been realized in Japan. This time, on the occasion of the 150th anniversary of the establishment of diplomatic relations between Japan and Italy, we are presenting a large-scale traveling exhibition that surveys Botticelli’s artistic legacy through more than 20 works gathered from Florence and other regions of the world.

Botticelli, who was trained in the studio of Filippo Lippi and spent most of his life in Florence, rose to fame as a painter of the House of Medici. Under the Medici’s patronage, he undertook paintings of wide-ranging subjects, from large-scale altarpieces to privately commissioned mythological paintings. While his contemporaries turned to naturalistic expression employing their command of perspectival space and chiaroscuro, Botticelli never deviated from a decorative, symbolic style reminiscent of medieval art and created his own, instantly recognizable world. Along with presenting the characteristic features and fascination of Botticelli’s work through religious paintings, mythological works, and portraits from his early years to his late period, the exhibition includes works by his master, Filippo Lippi, and pupil Filippino Lippi and traces his artistic lineage.