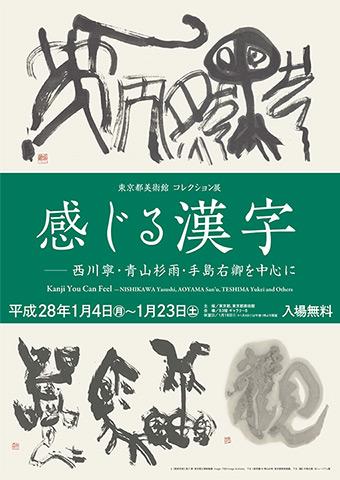 In January each year, Tokyo Metropolitan Art Museum holds an exhibition to showcase the works of calligraphy in its collection. The works are presented under a different theme each year in order to make apparent their beauty and power, and to disclose the history of contemporary calligraphy that has unfolded in the galleries of this museum.

This year, the exhibition looks at “kanji calligraphy.”
Kanji calligraphy, an ancient art conveyed to Japan from China, underwent a period of remarkable change after World War II. One phenomenon of this period, occurring in the field of traditional calligraphy, was the popularity of Ming and Qing styles and flourishing interest in calligraphy inspired by inscriptions on ancient bronzes and stone monuments (higaku).

As contemporary calligraphy evolved from practical, scholarly texts to the appreciation of calligraphic works mounted on high walls in art museums, the style of long hanging scrolls of the Ming and Qing dynasties resonated with the romanticism of post-war Japan and won popularity. Furthermore, amid ardent interest in bronze scripts prior to Wang Xizhi (303-361) and stone carved scripts of Qin and Han styles, calligraphers working in styles inspired by ancient bronze and stone inscriptions, particularly NISHIKAWA Yasushi and AOYAMA San’u, produced profoundly expressive works, rich in variation.
Another phenomenon of this period, occurring in contemporary kanji calligraphy, was the birth of shojisu-sho (Large Character Calligraph), fostered by TESHIMA Yukei and MATSUI Joryu. By limiting themselves to one or two characters and, at times, using gray ink to emphasize the shape of a character, they developed calligraphy that was more easily read and felt and, thus, more suited to artistic appreciation.